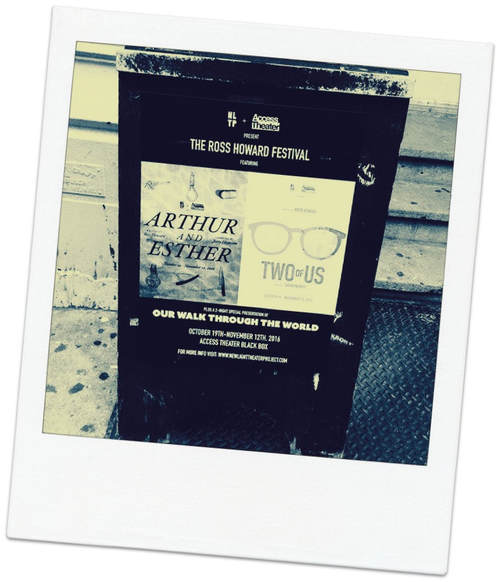 Ross Howard's work has been seen in London (Theatre 503, Old Vic Tunnels, Upstairs at the Gatehouse, Riverside Studios, Menier Gallery, Old Red Lion, Park Theatre, Finborough Theatre, Canal Cafe Theatre, Southwark Playhouse), Cork (Cork Arts Centre), Las Vegas (Onyx Theatre, Las Vegas Little Theatre, Nevada Conservatory Theatre), Minneapolis (Pillsbury House Theatre), San Francisco (The Phoenix Theatre), New York City (Cherry Lane Theatre, Theatre Row, Access Theater and Urban Stages) and developed at Last Frontier Conference, Great Plains Theatre Conference and at Western Carolina University. In 2002, he was invited to join the Royal Court Theatre Young Writer's Group. In 2008, he received a Fellowship from the Edward F. Albee Foundation. ARTHUR AND ESTHER was awarded “Best of Fringe” at Las Vegas Fringe Festival 2010 while NO ONE LOVES US HERE was a finalist for the New York Stage and Film Founders Award 2012. FRISKY & THE PANDA MAN was a winning finalist in the 38th Samuel French Off Off Broadway Short Play Festival in 2013 and PICTURE OURSELVES IN LATVIA was listed in New York's L Magazine's "Best of Theater 2014". ARTHUR AND ESTHER, NO ONE LOVES US HERE, PICTURE OURSELVES IN LATVIA and his evening of short plays OUR WALK THROUGH THE WORLD are published by Samuel French. In October 2016, his play TWO OF US (Listed as one of the 5 Out-of-the Box shows to see Off-Broadway from Playbill.com) showcased Off-Broadway, alongside ARTHUR AND ESTHER and OUR WALK THROUGH THE WORLD. THE ROSS HOWARD FESTIVAL was in recognition for the three years spent as the Resident Playwright of New Light Theater Project (As featured in American Theatre Magazine in "Know a Theatre") of New York. He regularly tutors at the Actor’s Centre in London, the city in which he currently resides. He holds an M.F.A in Playwriting from UNLV (2006) and is a member of  New Play Exchange and The Finborough Theatre’s Writers Group. In April 2018, his new play THE AMAZING ALWAYS received a public reading at The Drama Book Shop in New York.  Excerpts from NO ONE LOVES US HERE can be found in THE BEST MEN'S STAGE MONOLOGUES 2018 published by Smith and Kraus. TWO OF US was published in November 2018 by Samuel French.