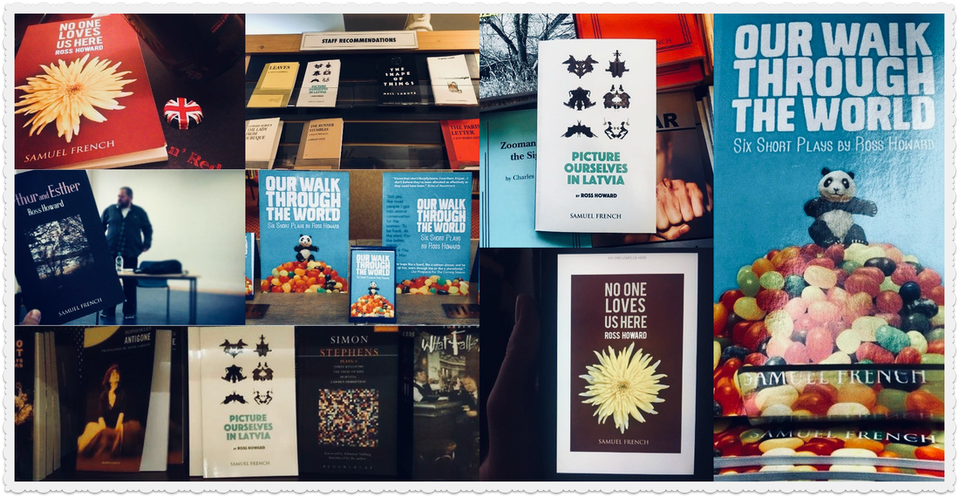 **Frisky & The Panda Man was a winning finalist ​at the
38th Samuel French Off Off Broadway Short Play Festival**
​
"An entertaining and fast-paced night of quirky comedy sprinkled with poignant emotional observations...a playwright who clearly has a unique and promising ability to combine humour and drama. The push and pull created by Howard's habit of addressing everyday human issues and emotions within peculiar and uncanny situations makes for a night of pleasing theatre."
One Stop Arts

"The six short plays were excellent throughout, all added up all in all to a very funny often challenging and not always easy to watch night at the theatre...a roller coaster of emotions. Big hearty laughs throughout then touching tender moments slapped us in the chops... an epic evening indeed."
Remotegoat

"‘The World of Ross Howard may not be that of yours and mine – it is anarchic, irreverent and often very funny. A challenge waiting to​ be picked up."
Prompt Magazine​​

​​​​"Howard's script sprints along with observation and humor... this is a special script..."
Las Vegas Review Journal

"Their story is tragic, but is told with warmth and hope. The language is poetic with hauntingly beautiful rhythms that capture the spectator's imagination with vivid imagery."
Theatre Is Easy

​​​"Howard’s great accomplishment is creating a skewed world that’s entirely consistent and self-contained...amoral yet compelling characters, Seinfeld-like but with even more nastiness; tight-lipped commentary on the explosive potential of family dynamics; and subtle and sometimes not-so-subtle comedy...at just the right length and pace, this compact play ought to find a welcome on a bigger stage."
Blog Critics

"Like a bored 19-year-old burning ants alive on a summer’s day, No One Loves Us Here takes a magnifying glass to an already disintegrating notion of white class and laughs as gleefully as Bart Simpson...congratulations to Ross Howard for playing me like a violin the entire length of the play."
OnStage Magazine

"Howard’s new work illustrates the characteristically 21st Century sentiments of unbridled selfishness, feigned apathy, and perennial discontent. His pointed, political indictment of our skewed American values is simultaneously too hard to watch and too illuminating to ignore."
Theatrescene.net
​​

"This play is the real deal: both light and heavy, romantic and cynical, and always bracingly unpredictable...It seems like a romantic comedy sometimes, but then this recedes and some kind of dangerous political point emerges like the fin of a shark in the water...a little miracle."
L Magazine

"The characterizations are rich, and Mr Howard’s script, punctuated with absurdist deadpan opportunities, has a promising Monty Pythonesque tone. "
The New York Times

"Two of Us is worth seeing for its excellent production and performances and its well-crafted, affecting dialogue, and as a reminder of how fragile is the human spirit and how easily our natures can go wrong."
BlogCritics